skip to main | skip to sidebar

lately my concept of bedtime is growing more vague. being someone who used to be vigilant in early to bed, ealry to rise, i am finding that the closer it gets to midnight the more i feel things that don't seem acceptable during daylight are suddenly okay. home feels safer and warmer to the darkness outside. music is more beautiful and lyrics more true. i feel, in my cozy apartment lit by lamp light, that i am somehow in on a secret with the moon. strangers across the street whose windows are still lit up are suddenly my confidantes in this new world, the darkness that surrounds all things bringing us closer together.
Posted by bird's eye view at 8:10 PM No comments:

How to be happy today

How to make your soul smile today.

Step 3: turn up the volume and let it fill up the room
Posted by bird's eye view at 2:07 PM No comments:

sketchball: A weird guy who is socially inept, makes off-color remarks, does strange socially unacceptable things, and has strange interests. This is the guy at a party who talks to you and scares you, not intentionally, but he doesn't know any better, and you want to leave real quick. Example: Q. Did you see that guy dancing to Duran Duran by himself in the workshop? A. Yeah, what a sketchball.

I prefer the term sketchbag to sketchball, but really, it's all the same. Sketchy is a good word, because so much in life is sketchy. Take for example a blind date one of my sisters recently went on. The guy asked her out at a cafe she works at, and she, wanting to please the dating gods, agreed to go. I told her, if nothing else it's a free meal. He shows up wearing a cowboy hat to a sushi restaurant, hits on the waitress, joked and lied to my sister that his father used to beat him... all within the first 5 minutes.... that set the tone. By the time he had told her he supplied the canadian forces with most of their weapons through an internet business he used to own, made some racist and sexist jokes, and told her he recently sold all his possesions because he was becoming to materialistic she was done her ice cream and ready to go. This guy is a sketchbag.

I met a guy this summer while I was working at a local fruit stand and he sold corn for my boss. He rode to work on a bike because he had no car or licence (even though he drove a truck for the job....), he told me he lived in a hotel in a shady area of the city because the house he used to rent had been seized by police in a raid of the grow-op he was running there. Not that he ever got caught. He took of his shirt and showed me his homemade tattoos of Bugs Bunny characters, told me how he had punched his mom and an uncle after he had heart surgery. He asked me if someone had stopped by my fruit stand that day and dropped off money for him, and when I said no, he told me he was going to go break this guys legs tonight. Then offered to go get me a coffee... only we were out in the boonies and he was on a bike... I guess it would have been more of an iced coffee by the time he biked back into the city, bought the drink and biked all the way back.... Okay... sketchy skecthbag.

But for some reason I love these odd and slightly insane characters. In the words of my mom : "That's what makes the world go round." And if nothing else, who doesn't need a good laugh recounting the experiences with the local sketchbags in your city.
Posted by bird's eye view at 1:58 PM 1 comment: 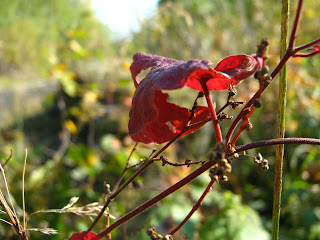 summer changing into fall makes me prone to sadness. i want to sit at my parent's kitchen table as a seven year old on a cool fall day slurping a bowl of soup and a glass of chocolate milk. i want someone to hold me, and i want it to last- the holding and the season. maybe it's the fact that i know it won't last long that makes it easy to get lost in fall, and let myself feel crazy for a little while as the whole world transitions. i can easily say it's not permanent and soon it will be winter and i will be okay again. a long winter, time to be hardy and strong against rough winds and blowing snow. there is no time to waver then, not like now when the leaves are deciding every day whether they should hold onto the branch for one more hour or if they should let autumn take them down.
down.
down.
Posted by bird's eye view at 9:35 AM No comments:

bird's eye view
Looking for perspective on one girl's life